A place where the sun seems to always shine upon the warm ocean waves, where fresh fish is abundant and cheap, where the sand is always white, the flamingos ever so pink and the people merry and gay as they frolic and play, Aruba is everything yet nothing how I thought it would be. One example of which is the first snapshot my mind and my camera captured, for flying into a Caribbean island looks just as serenely gorgeous as watching Hugh Jackman bathe himself with a bucket of water (Australia movie reference). As we descended closer and closer, I could almost imagine the waves directing the plane onto the runway as they greeted us into this One Happy Island. 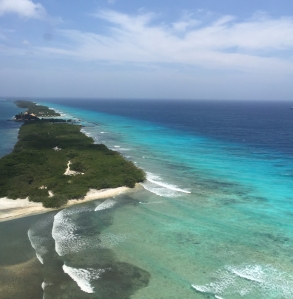 We arrived around noon when we promptly hit the dufry (duty-free) in the airport for some an adult bottle of refreshment. Here is where I inquired about a topic that is always of interest to me when entering a foreign land – What is the age at which you can buy alcohol? What is the drinking age? The cashier smiled as she responded saying you have to be 18 to purchase – I nodded in agreement as it was what I expected. And the drinking age? A wry smile settled upon her lips as she shrugged. No drinking age apparently. Muy interesante! Haha. Parents watch out when you bring your youngins here!

Once customs cleared us for not smuggling anything, we found a tourist info booth with a kindly fellow to whom we could bombard with questions! Taxi-HowMuch-Where-What-How-When-Tell us everything! And he did. Snorkeling over here, jeep rides there, waterfalls here, boat rides, beaches, eat this, see that, kayaking, tubing. You would think this guy thrived on receiving a plethora of repetitive questions for how nice he was. Within 10 minutes, we had our whole 3 days lined up with possibilities of what we wanted to do!

A cab is $9 per person, so is was $18 for the two of us – we gave her an even $20. In Aruba, they do actively use dollars, but they, also, use their national currency, the Florin. As of today, the exchange rate is 1 Florin per $0.56. Restaurants and merchants choose what to set their prices as, so make sure to look as which currency they’re using!

We stayed in a little hostel called Pista Q (apparently it goes by another name which I can’t remember at the moment) located in Oranjestad, Aruba’s capital city. I liked this hostel for the most part; only bad part was the kitchen was always filthy and someone ate our leftovers one day – one way to make an enemy of me is to take my food. Other than that, we had a private bath, a private room we could lock and a kick ass AC unit cause it was sweltering outside! We even had some cool roommates in the kitchen when we arrived that shared some welcome shots with us before we headed out into the streets caked in sunscreen and endless possibilities.

My travel buddy was awesome in many ways (we need to travel together again Gigi!); the biggest being that we both don’t mind walking around aimlessly to see what we find. Our feet took us through some dilapidated streets that were still beautiful despite the crumbling buildings; although, Oranjestad, to me, seems to have equal parts that are kept nice and falling apart. On one street I’d see a forlorn looking, abandoned building and its friends slouched at its sides, all of them being strangled by wild shrubbery. A few paces over you would see tame gardens of dazzling blossoms surrounding bright, pastel painted establishments. The sheer contrast makes this island all the more interesting, along with the natives. We passed local after local who’d return our smiles and nod us a genuine how’d’yado. Many times we would stop someone to ask where to find a grocery store, the bus stop, an atm, etc, and each time we would get the same courtesy. The person would stop once we addressed him, plant a pleasant smile upon his face and listen intently before kindly answering all of our questions; this would be followed by a “Enjoy Aruba!”

Once we’d skipped to fro from one ray of sun to the next, we easily found the boardwalk where we wanted to buy some basic tourist trinkets and put some yummies into our tummies. If you need souvenirs, this is the place to be! Shop after shop of t-shirts, wooden crafts of all sorts, shot glasses, magnets, swimsuit wraps – anything and everything you’d need to make sure you remembered you were in Aruba once your sunburn faded. Being the nerd I am I opted for the leather bookmark (even though I ended giving it to a friend). 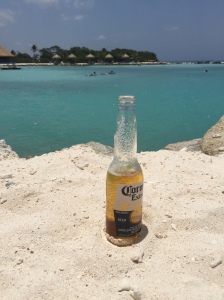 Before long, our camera phones and legs began to tire as our stomachs growled, so we found a place to grab some munchies. Walking into EetCafe The Paddock delivers a hundred thousand dollar view – probably more than that actually as there are hundreds upon hundreds of worldly currency stapled to the walls!

This place was a good first choice for us. Not only was I in another country for the first time, but I also experienced a new culinary venture. One I never thought I’d experience in Aruba! Nevertheless, I ended up devouring the escargot that was put in front of me. I’m not a very picky person, so I’ll try just about anything, and I’m sure sorry it took me so long to try this delicacy! It was buttery, garlicky deliciousness paired with toasted bread – Mmm! When I’m back in Paris, I plan to have these bad boys again. Who knew they’re so popular in Aruba?! We also ordered chicken wings (cause I’m actually addicted), which were perfectly crispy, and some wonderfully grilled shrimp and veggies. On the side is a curry pasta salad – cooked just right and not too much curry! 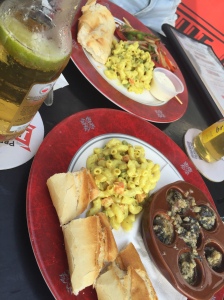 Later that night we took a bus for $2.50 to the High Rises at Palm Beach. This is where Arubans go to party. Club after club there’s no shortage of a place to get a drink and a pricey one at that. This is not somewhere you want to go for food or drinks if you’re trying to save money. We ate much better tasting, more authentic and cheaper food in the back streets of Oranjestad.

After we wandered through the shops and eateries in the area and before heading back to our hostel, we crashed a hotel’s private beach to listen to a band in the distance while we played in the sand under the stars. Then we got that very hotel to call us a cab, and we paid about $11 to get back. Be sure and ask the locals when the cab fare increases because it goes up a few dollars as it gets later… I want to say its 9 or 10 PM that it increases. The hotel concierge kindly told us this as he hurried us into the cab, saying as long as we get in before this time, we’ll save a few bucks – so nice of him!

Our taxi driver not only got us home safely, but gave us a wonderful yet brief HIstory lesson of Aruba. He made jokes about how their Prime Minister is a goofball who plays the guitar and thinks he’s really funny. I’m not sure how true that is, but it quite hilarious to think about. He told us how Aruba is a part of the Kingdom of the Netherlands (along with Curacao, Saint Martin and Holland) which is why there are so many Dutch street names, citizens and spoken language (along with Spanish and Papiamento).

The next day was spent lounging on Renaissance Island and feeding the frisky flamingos as we soaked in some sunburns and sucked down fruity, frozen beverages (Fun fact: Flamingos are born with grey feathers, but they turn pink once they eat enough shrimp and blue-green algae). I loved this island. The food and drinks are surprisingly affordable, even though, its owned by the Renaissance hotel. Not the mention the views are incredible! You can spend all day there if you want which we did – they provide towels, rent floats, have a store (an expensive one) for swimsuits, sunscreen, etc. and have a plenitude of hammocks, chairs and cabanas! Tip: to get to this island, you have to go to the front desk at the Renaissance hotel and purchase them to ride to the island for $100 per person, and you need to purchase the tickets probably a day in advance because they sell out fast! 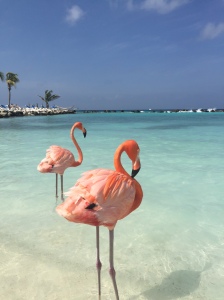 Side note: we were super lucky to meet a local to whom we paid $60 a person for this because he had a hook up for us. Maybe if you ask around you can find one, too! After the island, we went to eat some amazing seafood! The same local who gave us the discount to the island drove us to Zeerovers. A local place right on the water in the southern half of the island. They catch their fish daily, and you buy it by the pound then they cook it for you. It was the best shrimp I’ve ever had. I still dream about it sometimes.

For our last day we went to the High Rises to go snorkeling, kayaking and tubing via a speedboat, specifically to a little shack with rentals by a Marriott hotel on the beach. There are so many place you can go to do these things – some of which you can even bargain the prices, so give it a shot! We were able to use the snorkeling equipment for free because they said we wouldn’t see anything  since the waters are so popular, so if you want to see better snorkeling, you need to go to the south of the island versus the north.

We’re so happy we had time for one last meal before we left since we’re such foodies. Check out this spread… 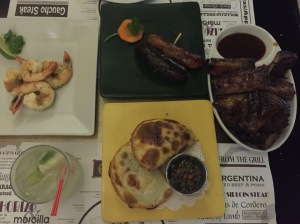 Garlic shrimp, chorizo, blood sausage, beef empanadas and ribs. Those ribs were the best! This was the perfect goodbye meal to a perfect vaca.

What I learned: Arubans are the most sincerely kind individuals I’ve ever met. You can feel safe walking around by yourself, even if you’re a female. When you pay with dollars you usually get Florin back. If you go to the tourist areas, you’ll be spending a lot of moola on food and drink. The bus system is pretty easy to use and goes pretty late depending on the day; there are, also, little tiny white vans that have “bus” on a piece of paper on them that drive around and pick you up at the bus stops. They look sketchy, but are totally legit and cost $2 per person, but they’re so small so they fill up fast! You can bargain with the little souvenir shops on the boardwalk, but not more than $1 or $2 from the original price.

The beaches are public and gorgeous and the most popular is Eagle Beach. To get a more authentic Aruban experience, I would say go South – cheaper food, better food and less crowded beaches.

This piece of heaven in the Dutch Caribbean is definitely a must. Thank you to the people of Aruba for being so welcoming! I look forward to going back to see all the happy people on this One Happy Island.