Anyone else know The Office better than the way around your own refrigerator? Well, there are dingoes, but Kevin was incorrect since there are crocodiles, not alligators.

Crocodiles are just one of the many dangerous species that roam the world’s largest island and its surrounding waters. My friends and family reminded me of this constantly before I headed out to cross off another continent from my list!

Saltwater crocodiles can be up to 7 meters long (23 Feet). Sharks like the Great White are copious, along with the Bull shark which can adapt to FRESH WATER. Yeah – no swimming in rivers while here. Brown snakes are vicious and poisonous; funnel web spider bites can take your life in 15 minutes whereas box jellyfish can kill you in as little as two minutes with excessive contact. Portuguese Man-Of-Wars (referred to as bluebottles by Aussies) enjoy their days floating around waiting for something to sting. Blue-ringed octopuses discreetly make your heart stop, while cone shells harpoon you with poison. The list goes on and on when thinking about the plethora of creatures that can and will ruin you. I consider myself one lucky lady since I did not come across any of these (let us pray it stays this way for future visits)!

My time in the land down unda was spent traversing through various parts of New South Wales (NSW) from the city center of Sydney and the Blue Mountains near Katoomba to the coastal areas of Palm Beach and Coogee beach.

NSW is just one of Australia’s seven, large states making up the size of this massive country that can fit the entire continent of Europe inside its boundaries! Along with NSW, there’s Queensland, Victoria, Tasmania, South Australia, Northern Territory and Western Australia. The capital of Australia, Canberra, is located within NSW, but the capital of NSW is the most well-known city of the entire country, Sydney.

Before you even set foot in Australia, you HAVE TO order your tourist visa. It’s super easy to do, cheap, and it’s all online. Also, you don’t have to put any documentation in your passport! The website I use is this one. Your visa needs to be renewed every 12 months from the date of issue.

One thing to be sure to remember is if you will need WiFi. I personally don’t like using my cellular provider since the price is your first born child for 5 GB of data, so I tend to use a pocket WiFi when traveling. If you didn’t have time to purchase one beforehand (I recommend Skyroam if you have time), then there are many booths right outside of customs in Sydney where you can purchase or rent a basic pocket WiFi. Many restaurants and pubs DON’T have WiFi, so don’t rely on that to get around if you need internet assistance.

To get into the City from the airport, it’s about a 20 minute train ride and about $17AUD. You can purchase your opal card (which will be your ticket to public transportation) at the airport train stop. Just turn right out of customs, go to the end of the hall, and make your way down on the elevator or escalator to the trains. I stayed for about 2 weeks and ended up spending around $130 AUD on buses and trains.

Side note: If you are going to Brisbane, you will need a different type of metro card. It’s called the Go Card and you can read about it here.

I explored much of Sydney. Walking in, up, down and all around hunting for the best coffee and any beer that wasn’t a pale ale for this is, I’ve come to find, the main style that is produced, at least in NSW. Surprisingly, my palate decided they’re actually not too bad, the majority isn’t at all hoppy and bitter like in the states which is why I don’t drink them there (unless you give me a Dogfish Head 120 minute to which I cannot decline).

If you’re a coffee lover, you will be walking on air and shaking the whole way as you will be so buzzed on caffeine. The coffee game in Sydney is strong, literally, and I saw only one Starbucks! Yay! I was infinitesimally happy to make a habit of stumbling into and prancing out of local coffee shops on every corner. 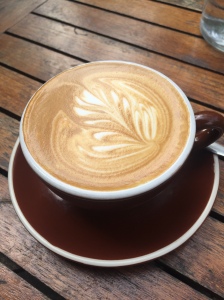 The Royal botanic garden is quite beautiful and provides a stupendous view of the Opera House and the Sydney Harbor. It’s free to enter and is close Hyde Park which is smaller and sprinkled with lunch goers and teeming with bin chickens (A.K.A. The Australian White Ibis)(A.K.A. the most hated bird in Australia).

I took a tour of the opera house compliments of my friend, Pat, who is part of the choir. One fun fact I learned is the superstition for good luck to kiss the sideboards on the way up to the main stage for your performance. You can even see old lipstick stained lip prints (say that 5 times fast) on the wooden planks that make up the wall right off the stage. Gross or cool or both? You decide!

Soooo… Taronga Zoo. Australians, I am sorry, but I did not like this zoo. Maaaaybe because the last zoo I saw was the San Diego zoo (which is some rough competition in terms of… well, everything), maybe it’s because much of the zoo was under construction, maybe zoos just make me sad, but I did not enjoy it. However, the area around the Taronga zoo was very nice, not to mention the ferry ride to it via Circular Quay (pronounced Kee) which you can pay for with your opal card.

The serene walk over to Curlew Camp and Sirius Cove Beach was quite enjoyable. On a scale from 0 to list your most peaceful place here it was a 9 (as some noisy tourists found their way near here) with its perfect view of the Sydney skyline and all the fresh breeze the harbor has to muster under green, leafy trees.

If you’re a fan of delicious food, the restaurant called Bodhi is right next to Hyde Park, and is super scrumptious. There is more awesome food than you could ever desire in Sydney as it is a melting pot of cultures and cuisines. Happy eating!

Whale, whale, whale… talk about big ass mammals. After buying a $30 ticket for whale-watching on groupon out of Darling Harbor, I listened to the captains briefing of “this will not be a smooth trip on the waters” and made some friends onboard. We stood on the upper deck; we swayed with the waves; we powered over our stomachs (unlike some poor souls on the lower deck – bring dramamine if this is an issue for yourself so you don’t spend the whole trip with your head in a bag); we shook as the cold overcame us; we narrowed our eyes to find the spout from a blowhole or full breach of one of those beautiful creatures.

We waited and waited and became impatient as our cold, achy hands grasped the handrails and waited some more until… ALAS! Being the show off that humpback whales are known to be, we found him as he breached acrobatically out of the deep! We named him Wilfred. We loved him. We lost him, found him, again, followed him with our earnest eyes, and as the minutes rolled by, we were not 100% sure it was Wilfred the whole time, or if Wilfred was a male or female! After hours of determination and shaking from the bite of the wind and chill of the oceanic waters splashing upon us, we were rewarded with the most breathtaking sunset mother nature could create on a cool November night.

(Pro tip: If going in a colder month with choppy waters as I did, please bring either waterproof shoes or a cover for your shoes because they’ll get wet thus making you shiver constantly. Also, bring a poncho or something else waterproof to put over your clothing. My jeans were soaked, but I know I was warmer than those girls wearing shorts. Thank you sweet baby Jesus for the waterproof jacket I brought last minute.)

I know what y’all are thinking… but what about the koalas?! No worries, mates! I’m pretty positive that 101% of humans think “koala” or “kangaroo” when Australia is mentioned. Why wouldn’t you? They’re adorable!  Although, the Koala is probably one of the only helpless animals still in existence (barely, poor little babies) in Australia. With all of the predators out there on that big island, it’s hard for them to live with no self-defense. Even a platypus has poisonous spurs on its feet!

No matter how much you crave it, most places will not allow you to hold or even pet a koala bear as it is illegal in certain areas, but fear not! There are some locations that will allow you to live your lifelong dream of cuddling a koala. I heard from a traveling couple that you can hold them on Hamilton Island off the coast of northern Queensland! Lone Pine Koala Sanctuary in Brisbane, also, let’s you get in some cuddles! Happy holding 🐨

The Koala Park Sanctuary Sydney is where I went. They allow you to take pictures with koalas, but that’s it. However, you can pet AND feed kangaroos, and see a host of other critters such as penguins, wombats, dingoes, wallabies, emus, and cassowaries (big, dinosaur-like birds that can be incredibly dangerous).

Are you ready to get out of the city and stretch your muscles? How about the Blue Mountains? Trails are in abundance, beauty is expansive and nature is waiting to encompass you as you trek through the Eucalyptus trees, breath in the moist earth and hear a sound so silent you forget all the evil the world has done to you.

Ready to buuuuurn? That Australian sun is waitin’ for ya. There are plenty of supremely beatific beaches to let you soak up that Vitamin D! Don’t forget sunscreen because that sun with scorch you like a hungry, tired, scorned woman as the ozone layer here has been rather depleted and will give you melanoma before you can say Quidditch.

Want any souvenirs from Australia? Here are some good ones:

Educate yourself with some Aussie terminology:

The land of awe-inspiring nature and possibly the home of the flat white is a place I hope to visit more often as more places are waiting for me… Melbourne, Perth, Tasmania and the outback. I don’t expect Hugh Jackman in his birthday suit, but it wouldn’t upset me.

To all of you Aussies, thank you for keeping your country pristine and your attitudes pleasant; please give me any recommendations.

To all else, if you haven’t already, it’s time to visit the true blue.

To delve into this experience more, click here to go to my vlog that goes along with this article!

*Before going abroad, do yourself a favor and be sure to know the “Basic Lessons of Traveling“!*